Overview of the Top Banks in Taiwan

In Taiwan, the Central Bank of the Republic of China (Taiwan) and the Financial Supervisory Commission regulate the banking sector. There are tens of banks and thousands of branches spread across island. 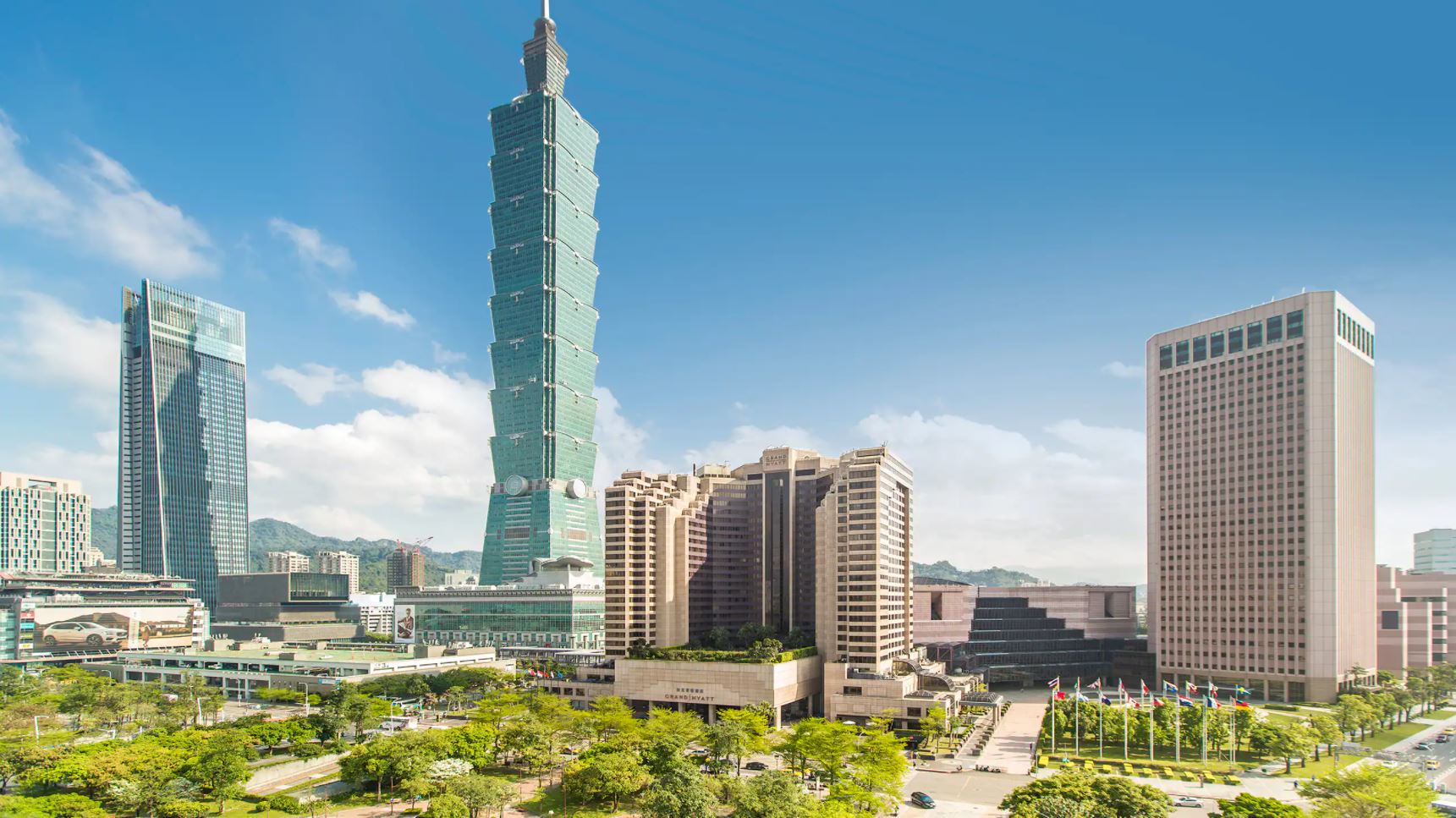 Since this article is about banks that accept deposits, we rank the top banks in Taiwan by their assets. This differs from investment banking, which the industry ranks based on M&A or capital raising volume. Taiwan has a limited investment banking scene. While there certainly exist investment banking activities in Taiwan, it’s relatively small compared to the volume in Hong Kong.

Unsurprisingly, the top banks in Taiwan are domestic companies. Postal Remittances and Savings Bank, Bank of Taiwan, CTBC Bank and the Taiwan Cooperative Bank lead the market. Among the top 16 banks in Taiwan, 15 banks are headquartered in Taipei. That shouldn’t be surprising because Taipei is the financial capital of Taiwan. Among all of Taiwan’s cities, Taipei has the most developed transportation infrastructure and most sophisticated financial network. Only 1 bank, the Chang Hwa Bank, is headquartered outside of Taipei.

BOT is the abbreviated name for the Bank of Taiwan. BOT’s predecessor is the Bank of Taiwan Kabushiki-gaisha, which the Japanese established in 1899 during its ruling period. After Taiwan took back governance from Japan, the government changed the bank’s name to Bank of Taiwan. It is Taiwan’s first government-owned bank. As is the case with many other state-owned banks, BOT has the most amount of assets in the industry. It also has the widest presence across the island. Bank of Taiwan’s brand is widely recognized among the Taiwanese population. BOT’s headquarters is in Taipei.

Established on March 14, 1966, CTBC Bank has been operating in Taiwan for over half a century. Over this period, CTBC has grown to become a major player offering a comprehensive suite of financial services. CTBC was the pioneer in Taiwan’s banking industry in many ways. It issued the first credit card and set up the first banking customer service center in Taiwan. It has a wide network of branches across Taiwan and overseas, including US, Canada, Philippines, and Indonesia. CTBC’s headquarters is in Taipei.

TCB is the abbreviated name for the Taiwan Cooperative Bank. The Japanese established the TCB in 1923 during its rule of Taiwan. Since its founding, TCB has grown to become of the top banks in Taiwan. It went public and currently trades on the Taiwan Stock Exchange. It has hundreds of branches spread across Taiwan and overseas. Taiwan Cooperative Bank’s headquarters is in Taipei.

Mega ICBC is the abbreviated name for the Mega International Commercial Bank Company. It has a similar name as Mainland China’s ICBC, which is a top bank in China. Similar to other top banks in Taiwan, Mega ICBC has a rich history going back several decades. It’s a public company trading on the Taiwan Stock Exchange. Like many of its peers, Mega ICBC also established its headquarters in Taipei.

Founded in 2005, Taipei Fubon Commercial Bank is the surviving entity following the merger of Taipei Bank and Fubon Bank. It is the banking subsidiary of Fubon Financial parent company. Fubon Financial has a wide range of businesses in the financial services sector beyond just banking. The bank is one of the top companies in Taiwan but it’s merely a unit within the larger Fubon organization. It is aggressively expanding its operations overseas in Southeast Asia. Taipei Fubon Commercial Bank’s headquarters is in Taipei.

In 2003, United World Chinese Commercial Bank merged with Cathay Commercial Bank to form the Cathay United Bank. The bank is aggressively expanding in Southeast Asia through a series of acquisitions. For example, it acquired Singapore Banking Corporation to tackle the Cambodia market. It acquired Bank of Nova Scotia Berhad Malaysia to tackle the Malaysia market. It is a public company trading on the Taiwan Stock Exchange. Cathay United Bank’s headquarters is in Taipei.

LBOT is the abbreviated name of the Land Bank of Taiwan. As the name implies, it is a wholly state-owned bank specializing in real estate and agricultural financing. Following the end of World War II, the Taiwan government established LBOT in 1946 to implement its land policies. LBOT has limited presence outside of Taiwan. Most of its operations are within Taiwan. Land Bank of Taiwan’s headquarters is in Taipei.

HNCB is the abbreviated name of the Hua Nan Commercial Bank. Founded in 1919, HNCB is among one of the oldest banks in Taiwan. The bank offers a wide range of financial services to individuals and institutions in Taiwan. Most of its business operations are within Taiwan. It does have some presence overseas, but those are very limited. HNCB’s headquarters is in Taipei.

Contrary to what it might seem at first glance, E.SUN’s name does not mean “electronic sun” or “digital sun”. Rather, E.SUN is the English phonetic name of its Chinese name, which means “jade mountain”. Founded in 1992, E.SUN Bank quickly grew to become one of Taiwan’s largest banks. That’s partially because the bank is a subsidiary of the Taiwanese financial giant E.SUN Financial Holding Company. The parent company has operations across banking, securities, investing, and consulting. E.SUN Bank serves retail customers as well as large corporations. E.SUN Bank’s headquarters is in Taipei.

CHB is the abbreviated name for the Chang Hwa Bank. The Japanese established the bank in 1905 and named it after Changhua County. It’s a public company trading on the Taiwan Stock Exchange. It’s also one of the few top banks in Taiwan to have its headquarters outside of Taipei. CHB’s headquarters is in Taichung.

In 1915, Chen Guangfu founded the Shanghai Commercial & Savings Bank. At the time, the bank was operating in Shanghai and became one of Mainland China’s top private banks. Following the defeat of the Chinese Nationalist Party by the Chinese Communist Party during China’s civil war, the bank followed the Chinese Nationalist Party and transferred its assets and operations to Taiwan. Hence, the bank has little presence in Shanghai city despite its namesake. Rather, most of its operations are concentrated in Taiwan. Shanghai Commercial & Savings Bank’s headquarters is in Taipei.

Founded in 1992, Taishin Bank is one of the leading banks in Taiwan. It is a subsidiary of the Taishin Group, which is a public company trading on the Taiwan Stock Exchange. Taishin Bank’s headquarters is in Taipei.

Founded in 1992, Bank SinoPac is one of the leading banks in Taiwan. It has overseas branches in Hong Kong, Kowloon, Macau, Los Angeles, and Ho Chi Minh City. Bank Sinopac’s headquarters is in Taipei.

TBB is the abbreviated name for the Taiwan Business Bank. TBB is a public company trading on the Taiwan Stock Exchange. Over years of reorganization, TBB is now a major provider of financial services to small and medium-sized enterprises. Today, it has over a hundred branches. Taiwan Business Bank’s headquarters is in Taipei.

A Gem Among the Top Banks in Taiwan: Chunghwa POST – (中華郵政)

Here’s a more complete ranking of the top 30 banks in Taiwan. 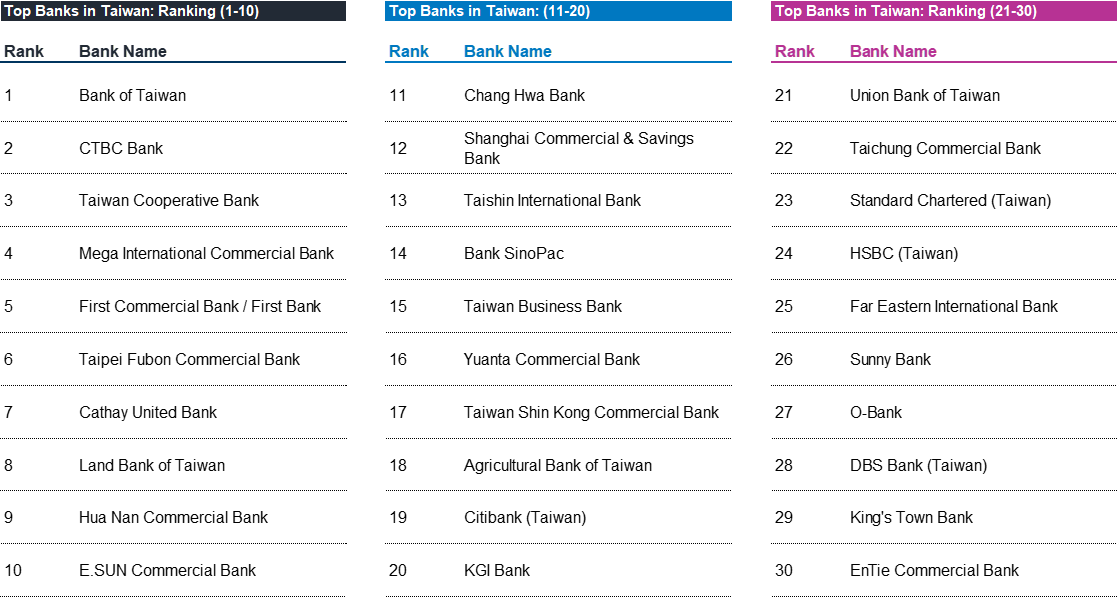 Preparing for a Career with the Top Banks in Taiwan

Lumovest is the finest institution in the world to learn financial and investment analysis. We teach you how to analyze financials and investments from the grounds up. Our curriculum is based on how things are done at the top banks and the top investment firms. Our lessons are interactive and visually intuitive. As a result, our courses are very practical and very relevant to what you’ll do on a day-to-day basis. The courses are taught by former Goldman Sachs investment banker.

Developing a strong financial analytical skillset will help you stand out during the Taiwan banks’ hiring process. Through our courses, you’ll learn accounting, financial modeling, LBO, DCF, M&A and valuation. At the end, you’ll receive an official blockchain-verified digital certification, which you can showcase on your resume. You can sign up here.