Overview of Top Banks in China

This article covers top banks in China in the context of the broader banking sector. If you’re looking for content specifically on investment banking in China, please refer to this article instead.

Banks in China are regulated under the “One Committee, One Bank, Two Commissions” framework. In Chinese, that’s known as 一委一行两会. The “One Committee” refers to the Financial Stability and Development Committee, housed under the State Council. The “One Bank” refers to the People’s Bank of China, or PBOC for short. PBOC is China’s central bank. Just like how the Federal Reserve sets the rules for banks in the United States, PBOC sets rules for banks in China.  The “Two Commissions” refer to China Banking and Insurance Regulatory Commission and the China Securities Regulatory Commission. Collectively, these four regulatory bodies are extremely powerful and keep the top banks in China healthy and growing.

As the world’s second largest economy (largest by GDP using purchase price parity), China has an enormous banking industry. Inside China, there are over 200 Chinese banks, each possessing assets of at least ¥50 billion. As we researched China’s banks, we discovered an interesting pattern. Western banks like to name their banks after founders’ names. Some examples include Wells Fargo and J.P. Morgan. By contrast, Chinese banks like to name their banks after certain industries and cities. Some examples are the Agricultural Bank of China, China Construction Bank Corporation, Bank of Beijing, and Bank of Nanjing. Nearly all the major cities has a bank named after it. This pattern could be due to the fact that many banks in China are state-owned and state-controlled. On the other hand, Western banks usually are not owned by the state. 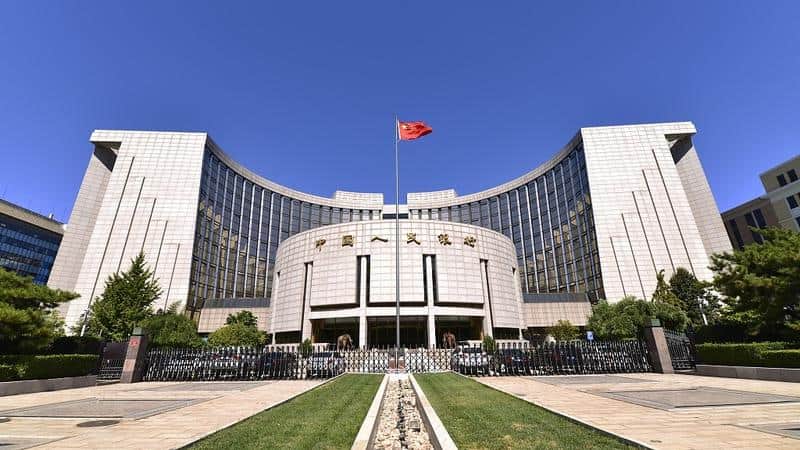 People’s Bank of China (PBOC) is the central bank of China. PBOC is not technically part of the ranking of the top banks in China by assets. However, we feel this article cannot be complete without mentioning PBOC. That’s because PBOC is by far the most powerful banking institution in China. If you have an opportunity to work at PBOC, we encourage you to seriously consider it.

1. Industrial and Commercial Bank of China

ICBC is the abbreviated name of the Industrial and Commercial Bank of China. Founded on January 1st, 1984, ICBC is a state-owned commercial bank. The Ministry of Finance of China provided ICBC with capital. The bank’s Tier 1 Capital in 2013 was the largest of one thousand global banks. It’s the first Chinese bank in modern history to achieve this distinction. In 2006, Goldman Sachs purchased a 5.75% stake in ICBC just before ICBC’s IPO for US$2.6 billion. At the time, it was the largest equity check Goldman Sachs has ever invested.

CCB is the abbreviated name of the China Construction Bank Corporation. Founded on October 1st, 1954, CBB quickly grew to prominence. In 2015, CCB became the 2nd largest bank in the world and 6th largest company in the world by market capitalization. In 2005, Bank of America purchased approximately ~9% stake in China Construction Bank for US$3 billion. At the time, this investment was Bank of America’s largest investment into China’s growing banking sector.

ABC or AgBank is the abbreviated name of the Agricultural Bank of China. Founded on July 10th, 1951, ABC has branches throughout China and expanded to broader Asia, Europe and North America. It’s headquarters is in Beijing. ABC has more than 320 million retail customers, 2.7 million corporate clients, and nearly 24,000 branches. It is China’s third largest lender by assets. Due to its enormous size, the Financial Stability Board classifies ABC as a systematically important bank.

BOC is the abbreviated name of the Bank of China. Founded in 1912, BOC is the second oldest bank in China. Like many other top banks in China, BOC’s headquarter is in Beijing. The Bank of China’s history began in 1905, when the Qing Dynasty established Daqing Hubu Bank in Beijing. In 1908, Qing Dynasty renamed it to Daqing Bank. When the Republic of China was established in 1912, the government transformed it into the Bank of China. As a result, BOC has a very rich history among the top banks in China. BOC is one of the world’s largest lenders and largest companies by market capitalization. The Financial Stability Board classifies BOC as a systematically important bank.

PSBC is the abbreviated name of the Postal Savings Bank of China. Founded on March 6th, 2007, PSBC provides basic financial services, especially to small and medium enterprises, rural residents and low income customers. It’s called “Postal” because the State Post Bureau provided PSBC with an initial capital of RMB20 billion in 2007. Today, PSBC has trillions of dollars in assets and possesses second largest number of branches, after the Agricultural Bank of China. Prior to its IPO in 2016, PSBC was the largest unlisted Chinese bank.

BOCOM is the abbreviated name of the Bank of Communications. Founded in 1908, BOCOM is the oldest bank in China. Fortune magazine ranked Bank of Communications No.151 among Global 500. The London-based The Banker magazine ranks it in top 1,000 banks in terms of Tier 1 Capital. During the 2000s, established western banks were making strategic investments into the Chinese banking sector. In BOCOM’s case, that strategic investor was HSBC. In 2004, HSBC agreed to purchase 19.9% of BOCOM for US$1.75 billion.

CMB is the abbreviated name of the China Merchants Bank. Founded in 1987, CMB is one of China’s most recognizable banks. Most civilians recognize the CMB brand. In 2021, the Fortune magazine ranked CMB in No. 162 among the Global 500 and No. 37 among the China 500 lists. The Banker magazine ranked CMB in No. 14 among the top 1000 banks by Tier 1 Capital. CMB has thousands of branches worldwide, most of which are located inside China.

IB is the abbreviated name of the Industrial Bank. Industrial Bank is a top bank in China headquartered in Fuzhou. Founded on August 26th, 1988, the bank provides a wide range of financial services for consumers, businesses and other institutions. It is a public company, trading on the Shanghai Stock Exchange. In recent years, Industrial Bank has been expanding beyond its commercial banking roots into the investment banking space.

SPDB or Pufa is the abbreviated name of the Shanghai Pudong Development Bank. Founded on January 9th, 1993, SPDB is a leading commercial bank headquartered in Shanghai. SPDB’s mission is to provide financial services for the development of Pudong New Area. This is a critical step in accomplishing the government’s objective of building Shanghai into a major international financial hub. Just as other western banks invested in Chinese banks in the early 200s, Citigroup invested in SPDB.

China established China CITIC Bank Corporation in 1987. It is the first commercial bank in China to participate in financing in domestic and foreign financial markets. In April 2007, the bank achieved simultaneous listing of A shares on the Shanghai Stock Exchange and the H shares on the Hong Kong Stock Exchange. The bank possesses over a thousand outlets serving over a hundred cities.

CMBC is the abbreviated name of the China Minsheng Banking Corp. Founded on January 12, 1996, CMBC is the first bank in China to be majority-owned by the private sector. CMBC strategically positions itself to focus on making loans to small and medium enterprises. In 2000, CMBC went public on the Shanghai Stock Exchange. Subsequently, in November 2009, CMBC went public and listed on the Hong Kong Stock Exchange. As of today, China Minsheng Bank has nearly 3,000 banking outlets and over 57,000 employees.

CEB is the abbreviated name of the China Everbright Bank Company. Founded in August 1992, CEB is a leading Chinese commercial bank headquartered in Beijing. CEB is listed on both the Shanghai Stock Exchange (August 2010) and the Hong Kong Stock Exchange (December 2013).

HXB is the abbreviated name of the Huaxia Bank. Founded in 1992, HXB is the fifth bank in China to go public on the Shanghai Stock Exchange. Similar to its peers who accepted strategic investments from western banks, HXB arranged a strategic investment from Deutsche Bank. The firm has a major focus financing the projects of low-income housing construction and urban-rural integration. It offers a substantial portion of its loans to serve “Agriculture, Rural Areas and Farmers”. It has established significant outlets in Chinese villages and rural counties.

BOB is the abbreviated name of the Bank of Beijing. Founded in January 1996, the bank is a public company listed on the Shanghai Stock Exchange. According to the company, despite having most of its branches outside of Beijing, BOB derives a substantial portion of its revenue solely from Beijing. In 2005, the Dutch financial group ING became a strategic investor and purchased 19.9% of BOB. The Beijing government is also a major shareholder in the company.

BOSC is the abbreviated name of the Bank of Shanghai. Founded on December 29th, 1995, the bank is named after and headquartered in Shanghai city. It is a public company listed on the Shanghai Stock Exchange. In the early 2000s, BOSC received strategic investments from the International Finance Corporation and the World Bank. Despite its name, BOSC has expanded far beyond Shanghai into southern, western and central China. As of today, Bank of Shanghai is one of China’s largest banks by assets.

Compared to other top banks in China, Bank of Jiangsu is relatively young. Founded in January 2007, the bank quickly grew to become one of China’s largest banks in merely a decade. The bank is a public company, trading on the Shanghai Stock Exchange. Named after Jiangsu province, the bank has presence in all counties inside the province. Similar to other banks named after cities and provinces, the bank has expanded beyond its namesake place. It focuses on three main economic regions: Yangtze River Delta, Pearl River Delta, and the Bohai Rim.

NJCB and BoN are the abbreviated names of the Bank of Nanjing. Founded in 1996, BoN is one of the top banks in China. BoN focuses on providing banking services for medium-sized enterprises and small businesses, totaling over 100,000 corporate clients. The bank has also a large individual client base, totaling over 2 million individual clients. It can offer all kinds of banking products, including loans, wealth management products, credit cards, etc.

Other Top Banks in China 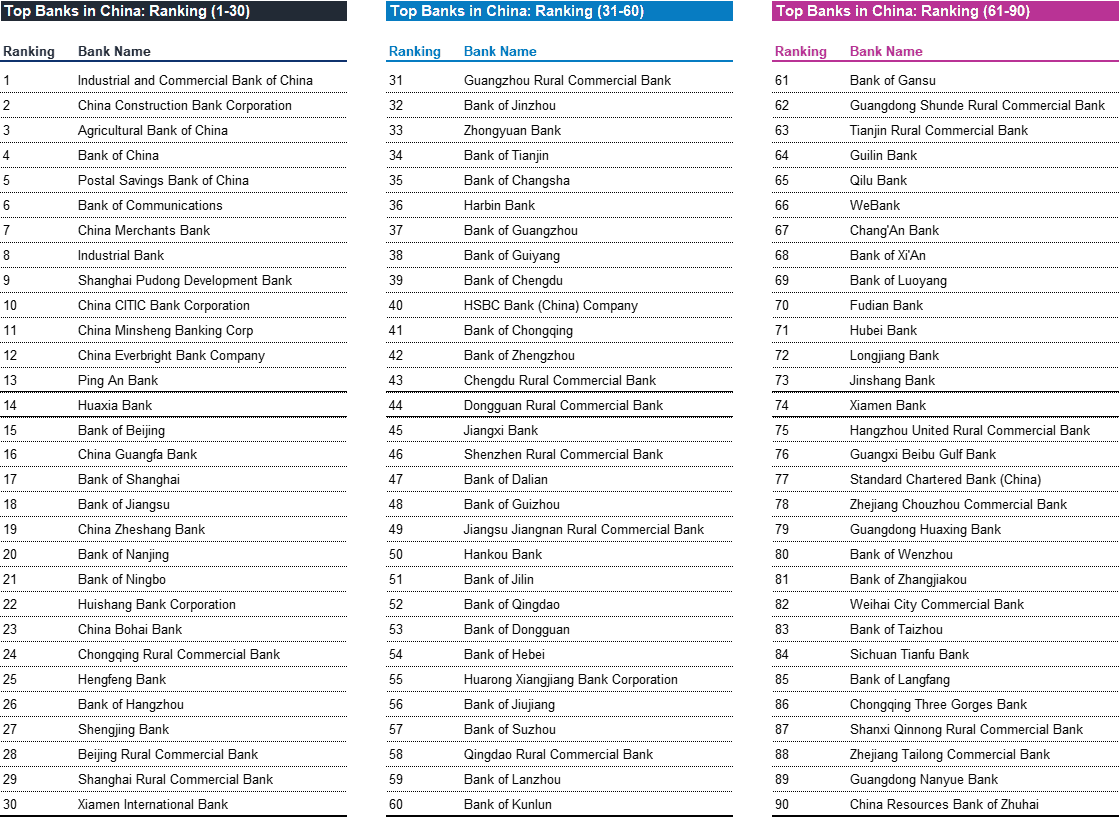 Trends Among the Top Banks in China

The banking industry in China is constantly evolving due to the large market potential and the intense competition. There are three main trends among the top banks in China.

Second, there is increasingly stricter regulation to prevent banks from becoming “too big to fail”. In the recent years, there were several instances of banks in China running into trouble. As a result, the PBOC and the CBIRC had deliberated on rules to impose on systematically important banks. Regulations will continue to tighten in the coming years to curtail excessive risk to the country’s economy.

And finally, China is launching its own digital currency, the Digital Yuan or the e-CNY. This will materially transform money as people in China knows it. In the coming decade, Chinese banks will adjust their product offerings to better align with this new digital currency.

Lumovest is one of the world’s leading education providers. We teach you how to analyze financials and investments from the grounds up. Our curriculum is based on how things are done at the top banks and the top investment firms. As a result, our courses are very practical and very relevant to what you’ll do on a day-to-day basis.

Developing a strong financial analytical skillset will help you stand out during the hiring process in China. Through our courses, you’ll learn accounting, financial modeling, LBO, DCF, M&A and valuation. At the end, you’ll receive an official blockchain-verified digital certification, which you can showcase on your resume. You can sign up here.