In this article, we’ll take a look at the top banks in Singapore. As one of the world’s wealthiest countries, Singapore has a buzzling banking industry. The Singapore banking industry has a total asset size of approximately US$2 trillion and growing by the day. Since Singapore is a major international financial hub, its banking industry is critical to financing Southeast Asia’s trade and development. In fact, Singapore’s banking sector is a rising competitor to that of Hong Kong.

A set of five laws govern Singapore’s banking industry. They are the Banking Act, the Monetary Authority of Singapore Act, Anti-Money Laundering Regulations, Payment & Settlement Systems Guidelines, and the Securities and Futures Act. The Monetary Authority of Singapore (MAS) enforces these laws and regulates over 150 banks (also known as “Deposit-Taking Institutions”) in Singapore. Singapore has four main local banks along with many foreign banks.

The Different Types of Top Banks in Singapore

Full Banks conduct a whole range of banking business for retail and corporate clients. Foreign banks enjoy less flexibility than their local counterparts in their branch and ATM networks.

Wholesale Banks engage in the same range of banking business as Full Banks except that they do not carry out Singapore Dollar retail banking activities.

A bank Representative Office may carry out liaison work and market research only. They are not allowed to provide any actual banking or securities services in Singapore. 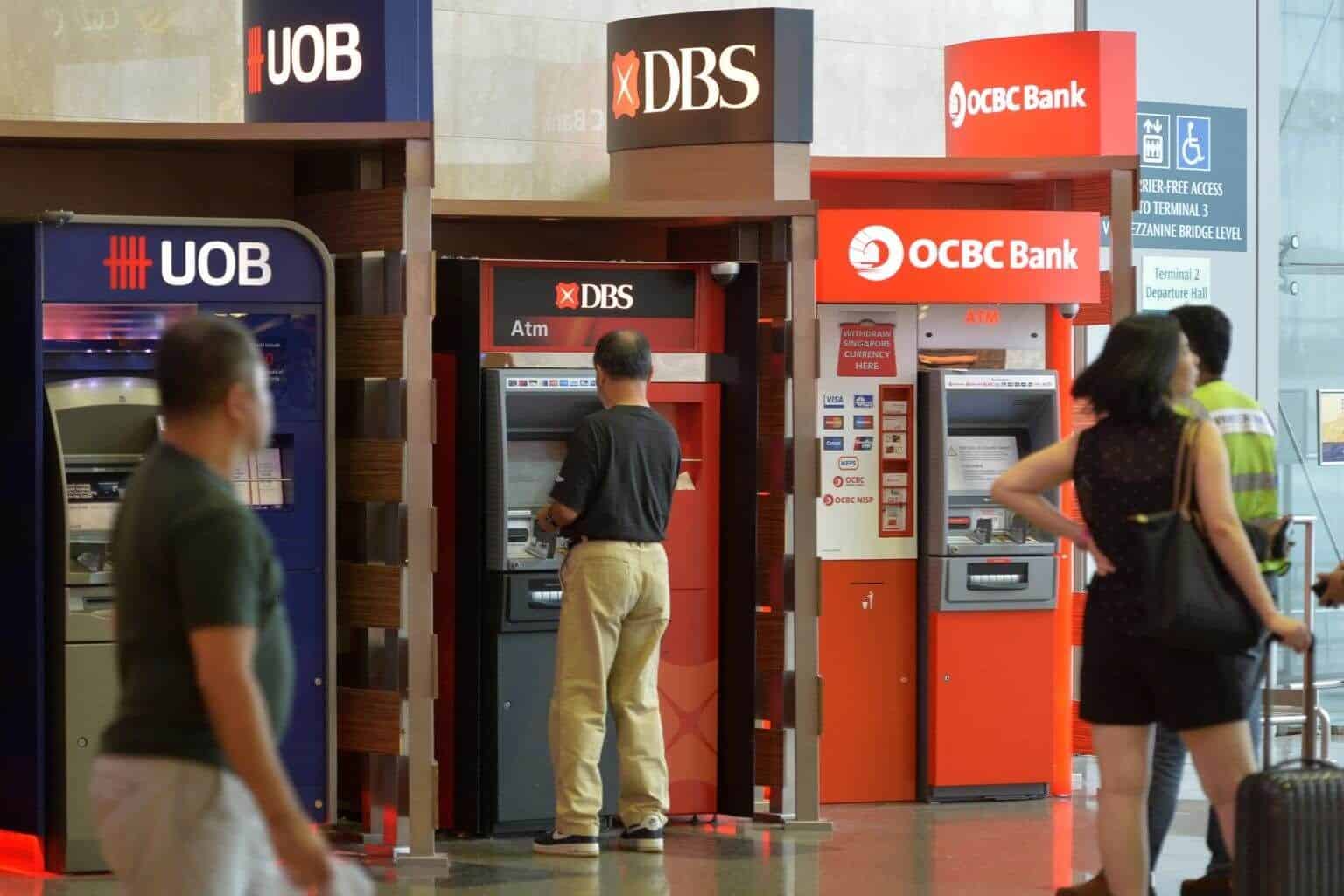 Since this article is about banks that accept deposits, we rank the top banks in Singapore by their assets and general retail presence. This is different from investment banks, which the industry ranks based on M&A or capital markets volume. Unsurprisingly, the top banks in Singapore are the Singaporean banks. DBS, OCBC and UOB dominate the city-state’s banking scene. These are the big three native Singaporean banks. The rest of the market is primarily occupied by foreign banks.

Formerly known as the Development Bank of Singapore, DBS Bank is the Singapore banking industry’s market leader. The Singapore government established DBS in 1968 to facilitate the country’s economic expansion. The idea was to have a bank that can handle foreign investments and provide financing to commercial projects. As Singapore became one of the world’s wealthiest countries, DBS quickly ascended to become one of Asia’s top banks. DBS’s headquarters is in the Marina Bay district and trades on the Singapore Exchange. Along with OCBC and UOB, DBS is one of the three mega banks in Singapore.

OCBC is the abbreviated name for the Oversea-Chinese Banking Corporation. In 1932, three banks (Chinese Commercial Bank, Ho Hong Bank, and Overseas-Chinese Bank) merged together to form OCBC. In the years thereafter, as Singapore’s economy expanded, the bank quickly grew to become one of Southeast Asia’s largest banks. OCBC’s headquarters is near the Singapore River and trades on the Singapore Exchange. Along with DBS and UOB, OCBC is one of the three mega banks in Singapore. OCBC also owns Bank of Singapore. Hence, we’re not breaking the Bank of Singapore out on its own here because it belongs to OCBC.

SC is the abbreviated name for Standard Chartered. Standard Chartered has a long history of over 160 years in Singapore. SC where opened its first branch in Singapore in 1859. The bank operates in SG under a Qualifying Full Bank (QFB) license. It offers a full range of banking services across personal, priority and private banking. In addition, it also provides business clients corporate, commercial & investment banking services.

Citibank Singapore Limited is the Singapore subsidiary of the American global bank Citibank, which is itself a subsidiary of Citigroup. The firm first entered the Singapore market in 1902 under the name International Banking Corporation (IBC). It was the first American bank to set up a branch in Singapore. The company then received the Qualifying Full Bank (QFB) license in 1999. Citibank is headquartered in Asia Square. The firm is a pioneer in the Singapore banking sector in many ways. For example, Citibank was the first to popularize the use of ATM machines in the country. It was also the first to popularize telephone banking service.

Maybank is one of Malaysia’s largest banks. Because Singapore is located right next to Malaysia, the two country have significant population and business interactions. Maybank is among Asia’s leading banking groups and is Southeast Asia’s fourth largest bank by assets. Maybank Group has an international network of approximately three thousand branches and serves all 10 ASEAN countries. Singapore is one of Maybank’s largest markets outside of Malaysia. Maybank entered Singapore in 1960 and currently operates in Singapore under the Qualifying Full Bank (QFB) license.

HSBC is the abbreviated name for the Hongkong Shanghai Banking Corporation. The bank first entered the Singapore market in 1877 when it opened its first branch in the country. For more than 140 years, HSBC Singapore kept its headquarters in Collyer Quay. In 2020, HSBC moved to the Marina Bay Financial Centre. HSBC in Singapore offers a comprehensive range of banking and financial services including retail banking and wealth management; commercial, investment and private banking; insurance; forfaiting and trustee services; securities and capital markets services.

RHB was established in Singapore in 1961 as UMBC Bank. After a series of corporate mergers and reorganizations, the firm now brands itself as RHB Singapore. RHB is a Malaysian bank. Similar to Maybank, RHB expanded to Singapore because of the country’s geographic and cultural proximity to Malaysia. RHB serves both retail and corporate customers. For retail customers, it offers Retail Banking and Wealth Management. For corporate customers, it offers Commercial Banking, Corporate Banking, Treasury, Structured Finance and Investment Banking services.

Preparing for a Career with the Top Banks in Singapore

Lumovest is one of the world’s leading education providers. We teach you how to analyze financials and investments from the grounds up. Our curriculum is based on how things are done at the top banks and the top investment firms. As a result, our courses are very practical and very relevant to what you’ll do on a day-to-day basis. The courses are taught by former Goldman Sachs investment banker.

Developing a strong financial analytical skillset will help you stand out during the hiring process in Singapore. Through our courses, you’ll learn accounting, financial modeling, LBO, DCF, M&A and valuation. At the end, you’ll receive an official blockchain-verified digital certification, which you can showcase on your resume. You can sign up here. 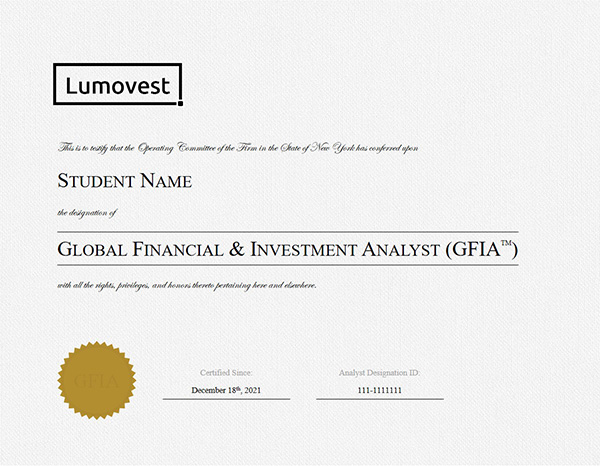