What is an Income Statement?

The Income Statement shows the company’s revenue, cost and profits over a period of time. Along with the Cash Flow Statement and Balance Sheet, it’s one of the three main financial statements. You can think of it as a financial report that tells you how much money the company made during the period. Pretty much all of the highest paying finance jobs would require a strong understanding of this financial statement.

The Income Statement adds up all the sources of income and subtracts all expenses. What it has at the end, is profit, also known as “the Bottom Line”. 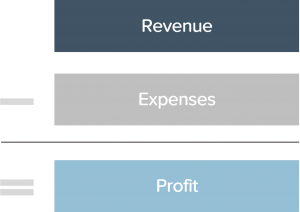 A key takeaway from an Income Statement is how much profit the company earned during the reporting period. This financial statement starts with revenue, which is often the biggest source of income, adds other incomes and subtracts expenses.

If the company generated more income than cost during the period, it’ll record a profit. This is known as Net Income or Net Profit. But if the company incurred greater cost than what it generated in income, it’ll record a loss. This is known as Net Loss. Either way, the Net Profit / Loss number is often show at the bottom of the report. For this reason, it’s also known as the “Bottom Line”.

Essentially, the Income Statement shows how the money made from selling products is transformed into profits and profit per share.

Here’s a real Income Statement example for Snapchat (NYSE:SNAP). You can find this example on PDF page 68 of Snap’s annual report. 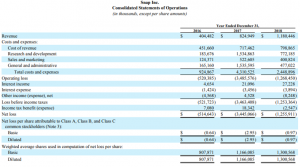 As you can see, this financial report starts with Revenue, and then subtracts expenses and adds other sources of income. In this case, the total expense is greater than total income, so the company is incurring a Net Loss.

Second, notice that the numbers are presented “in thousands, except per share amounts”. This means that data related to financials per share are presented as-is. In other words, $2.95 of net loss per share means exactly $2.95. Not $2,950. However, all other numbers are shown in thousands. In Snapchat’s Income Statement, that means all the numbers between Revenue and Net Loss are shown in thousands. Same thing goes for “weighted average shares used in computation of net loss per share”.

And third, notice that the Income Statement often shows several years of data. It’s standard for companies to show several years of data across the columns. They do this so readers can easily see how the company performed over time. Setting consecutive years’ data side-by-side makes it easy for analysts to identify patterns. On a related note, notice that the periods are clearly labeled. “Year Ended December 31” to let readers know that the numbers reflect performance over a one year period. 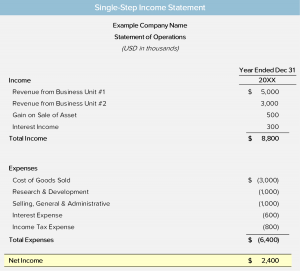 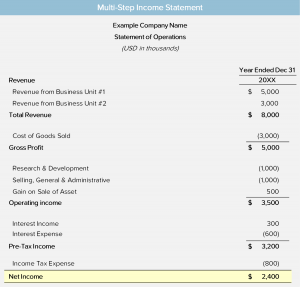 The Income Statement always begins with Revenue. Revenue is always the first line on the report. It’s always at the top. For this reason, it’s also known as “the top line”. This stands in direct contrast to Net Income / Net Loss, which is known as “bottom line”.

From Revenue, we subtract Cost of Revenue to calculate Gross Profit. Gross Profit measures the amount of profit purely from what the company sells.

And then from Operating Income, we add and subtract non-operating related income and expenses. This gets us to the Net Income / Net Loss number, which is the bottom line.

See? It takes multiple steps along the way to go from Revenue to Net Income / Net Loss. Hence the name, Multi-Step Income Statement.

The Stable Dollar Assumption is an assumption that the currency used to prepare the financial statements (U.S. Dollar for American companies) is stable over time, without being affected by inflation or deflation.

The Accrual Principle requires companies to recognize revenue based on when it’s earned rather than when payment is received. For example, suppose a company has delivered goods to a customer who has not yet paid. Under the Accrual Principle, the company should record this Revenue on the Income Statement.

Likewise, the Accrual Principle also requires companies to recognize expenses based on the Matching Principle and when it’s incurred as opposed to when cash payments are made. For example, companies would have to record the month’s utility expense even if they haven’t paid yet.

Small, mom and pop stores are likely to ignore the Accrual Principle. They tend to prepare their financial statements on a cash basis, based on when cash is received and paid. It’s a lot easier for them to track cash movements than it is to track accrued revenue and expenses. However, all publicly-traded companies in the US and Europe will observe the Accrual Principle and prepare their Income Statement accordingly.

Let’s go over the common Income Statement line items. There may be some variations among companies, but the gist is the same. Below, we lay out these common line items in the order they usually appear.

Are you starting to see the flow behind the Income Statement? It starts with Revenue. From here, it subtracts Cost of Goods Sold to get Gross Profit, which is the profit of the products sold. Then, it subtracts other operating expenses to get Operating Income. This is the profit of the entire business operations. Then, it accounts for other income and expenses outside of the business, like interest and taxes to calculate Net Income. And finally, it divides the Net Income by the Weighted Average Shares Outstanding to calculate Earnings per Share. What we have at the end is the total profit for all shareholders and the profit entitled to each share.

Now that we know the common line items, let’s learn about the important Income Statement formulas. We’ll lay out the formulas we use to compute (1) certain line items and (2) ratios.

While the Income Statement can tell us a lot about the company’s profitability, it has 2 major limitations. It doesn’t measure cash flow and it doesn’t paint the full picture of the company’s earnings power.

Does Not Measure Cash Flow:

Revenue and expenses on the Income Statement are recorded on an accrual basis. Recall that we learned about the Accrual Principle and Matching Principle earlier in this article.

Because the Income Statement doesn’t track when cash is received or paid, it doesn’t measure cash flow. Ultimately, the value of a company is based on how much cash flow it’ll generate. For that, we have to turn to the Cash Flow Statement.

Does Not Paint the Full Picture of Earnings Power:

The Income Statement under US GAAP records all income and expenses incurred, regardless of circumstances. This could create a misleading representation of the company’s true earnings power. For example, an Income Statement might show a significant increase in Revenue and profits relative to the prior year. This would give the impression that the business is on a great trajectory. However, this increase could be due to a recent acquisition as opposed to natural organic growth. It’s up to analysts to dissect the numbers and understand the story behind the numbers. Another common issue is that companies could’ve incurred certain one-time expenses. These expenses might’ve been incurred due to unusual events that won’t occur again. As a result, these non-recurring expenses could make the company’s earnings lower than what it’s normally capable of.

Because of these limitations, analysts can’t rely their opinion of a company solely based on the Income Statement. We have to evaluate the company in conjunction with the Cash Flow Statement and the Balance Sheet. We should also make manual adjustments to the GAAP metrics to assess the true underlying earnings power of the business.