What is “Effect of Exchange Rate Changes on Cash”?

“Effect of Exchange Rate Changes on Cash” refers to the changes in the value of a company’s cash balance due to fluctuations in foreign currency exchange rates. It’s a common line item on the Cash Flow Statement. Companies that operate 100% domestically with no foreign commercial activities are unlikely to have this line item. On the contrary, companies that conduct business abroad will likely possess this line item. Since many publicly-traded companies are multi-national corporations, many public companies report this line on the Cash Flow Statement.

By contrast, large multi-national companies often conduct business beyond their home country. Due to their overseas presence, they often deal with the foreign currencies of whichever country their operations are located. Each country will have its own official currency. Functional Currency is the currency of the primary economic environment in which an entity operates.

Because of Tesla’s presence in many difference countries, it has many different Functional Currencies. However, when Tesla reports its financial statements, it has to report the numbers in the US Dollar. In other words, Tesla’s Reporting Currency is the US Dollar. On the Balance Sheet, the company must report its Cash & Cash Equivalents balance in US Dollar. This requires the company to convert each Functional Currency into the Reporting Currency.

Impact on the Cash Flow Statement

“Effect of Exchange Rate Changes on Cash” is important because it changes companies’ cash balance in the Reporting Currency. It is usually situated at the bottom of the Cash Flow Statement, immediately after Cash Flow from Financing. Most times, it will either increase or decrease the companies’ cash balance in the Reporting Currency. Rarely does it have neutral impact because rarely do currency exchange rates remain exactly the same.

For example, here’s the “Effect of Exchange Rate Changes on Cash” from McDonald’s Cash Flow Statement. McDonald’s is an American company with US Dollar as its Reporting Currency. However, it operates throughout the world with many different Functional Currencies. It’s no surprise then that foreign currency exchange rates can significantly affect the company’s cash balance. 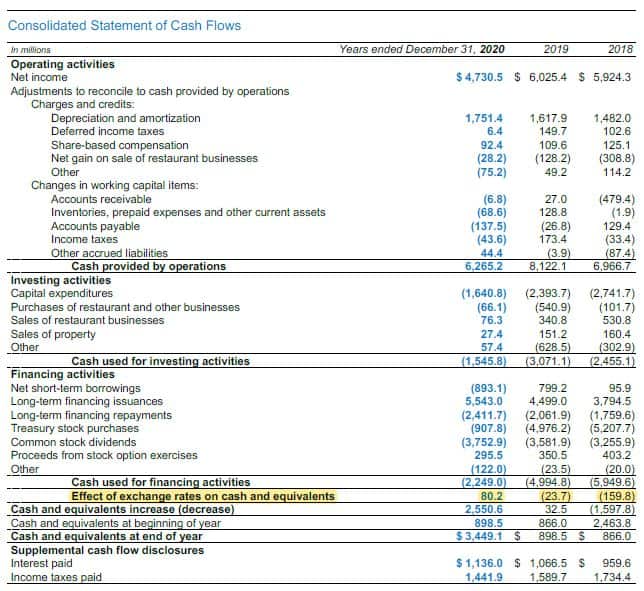 “Effect of Exchange Rate Changes on Cash” refers to the changes in the value of a company’s cash balance due to fluctuations in foreign currency exchange rates. It exists because companies’ Functional Currencies may differ from their Reporting Currencies. It appears towards the bottom of the Cash Flow Statement.